Hello!  I was able to get my dossier off in time due to a small miracle!!  Thanks to all who helped out.  I am working on updating my thermometer, but I am having some difficulty...

I am attempting to get a final tally on fees that I will need and when they will be due from my placing agency, but have yet to receive this estimate.  But let me tell you a little bit about how I was only barely able to get the dossier off in time!

My agency had told me they needed it in hand by May 25th, and since I knew that was a holiday, I contacted them to make sure someone would be there on Friday, May 22nd to receive it.  They said someone would be available, so off to work I went.  I went to the office of the Secretary of State in Boise, Idaho (about 25 miles from home, not bad) and dropped off the documents to be apostilled.  I dropped them off about 0815, about 15 minutes after they opened.  I was assured that they would be ready by early afternoon, so I went home to await the phone call.  The lady called at 1015 to say she was about done, but there was a problem with a few of the documents.  I ran up there to see what the problem was...it turns out I had forgotten to get two of the documents notarized (I still don't know how I screwed this up), and 3 of the other documents needed a different kind of notary...and they could be fixed, but I would have to go to the people who had notarized them and have them fixed.  It was easy enough to get the non notarized documents notarized and apostilled, but there was a problem.  The lady at the bank had done one of the documents for me...and she was in Caldwell about 30 miles away.  The other lady who did the other two documents, a wonderful friend of my cousin's, was at work...and I was unsure if I would be able to get a hold of her in time (I had to have everything to FEDEX by 1700, and my cousin's friend would be unreachable until she got off work at 1730).  I was in a panic, but I did everything I knew I could get done, and said a little prayer about the other notary!!  My cousin, Jennifer, got in touch with me and told me that her friend was actually going to get off work at 1630, and we could meet her up at her place of employment and have her finish off the documents.  We ran up there, met with her (her name is Renee, and I now love her).  She did the documents the way they asked, and off to the FEDEX store we raced...I got the documents sent at 1656...only 4 minutes to spare!!  I am so grateful to everyone who made this a possibility...I received confirmation on Friday afternoon that my agency had received the documents!!

I thought this story was somewhat amusing now that all is said and done...it sure wasn't funny at the time!!  Thanks to all who donated monetarily, by notarizing, and by sending positive thoughts and prayers.  I could not have done it without you!!

Hello!!  I was so excited to see a $20 donation to my paypal account, lorialicat@aol.com.  I am so appreciative, and I want to let all know, that if I am unable to reach my goal and send my dossier, I will refund all money donated to my paypal account.  I found out in my latest update that Violet had heart surgery in December, when I had been told previously that she had no heart defects...I am so grateful that she received the surgery she needs, and it makes me more desperate to get to her.  I greatly appreciate any donations and prayers...thank you all so much!! 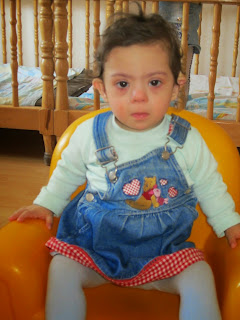 It has always been hard for me to ask for help, but I am pleading for it now.  This is Violet...a pic from about a little over a year ago.  I have committed to her and have been trying to get to her...and it has not been smooth sailing!!  I had hoped to be able to send my dossier to her country in Eastern Europe in the beginning of June, but my agency said I need to have it to them by May 25th or my adoption proceedings will be canceled.  I am about $2500 short for that!!  I need the money in hand by May 22nd, so I can overnight everything to my agency and they can get it by the 25th.  I don't want to give up...but will have no choice without that money. Please say a prayer for Violet and I, and any help is appreciated!!

I was excited to get an update on her Monday!  She is walking and potty trained and had heart surgery in December...they sent me a video (unfortunately, I am unable to share it...country rules) and she is looking so terrific!!  I cannot wait until I can get to her beautiful home country and learn about her...I am so in love!!

If you are able to make donations...please make them to my paypal account lorialicat@aol.com.

Blessings to all and thank you for any help you can offer!
Posted by Ali at 5:22 PM No comments:

Ali
Hi! I am Alison Greene. I live in Nampa Idaho and work as an RN in the mental health field. My older sister with disabilities lives with me. The one thing I need to make my live complete is adding a child!!